Paper alert – Molybdenum isotopes in basalts, and potential constraints on the redox state of subducted slabs

It's fresh off the press, Qasid Ahmad and co-authors (including yours truly) just published a short paper at GPL (here) providing some constraints on the redox state of subducted slabs, using molybdenum isotopes. And yes, articles in Geochemical Perspective Letters are fully open-access, thanks to the EAG support.

Using this new work to re-activate this page, but note that i've posted a short thread on twitter, check it out below.

The studied objects here are basalts dredged up on the South-Atlantic mid-ocean ridge. These basalts record well-known interactions between the sub-oceanic mantle and plume-derived components, delivered to the ridge by both the Shona and the Discovery hotspots. 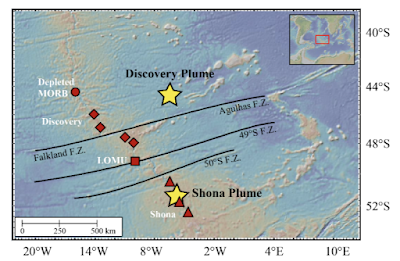 The new finding in this work is the observation of correlations between Mo stable isotopes and radiogenic isotope tracers such as Nd and Sr isotopes.

This is important, because this shows that Mo isotopes behave as a source tracer, at least in these basalts. these trends do not seem universal, as literature data (smaller symbols) show a distinct behavior than our new measurements. Anyways, we were able to conclude that something unique, with an enriched geochemical composition, contributes to the source of these basalts. Mixing between the mantle and that enriched component generate the observed correlations.

For those who would want to learn more, these trends were already observed in 2013 and in 2020 for sulfur and selenium isotopes in the very same samples. Nice to see it further confirmed with molybdenum!

Taken together, those multiple trends tell us that whatever is enriched in these sources must be enriched in sulfur, selenium, but also in molybdenum. We conclude that ~1-2% Proterozoic sediment could easily explain the data. Now interestingly, Qasid performed a least square error analysis on the data. He found that the molybdenum isotope composition of the recycled sediment is likely anywhere in the 'bluest' domain in the figure below (left and right, for a data fit for Sr and Nd isotope respectively). Definitely not dealing with a sediment of Phanerozoic age, right? 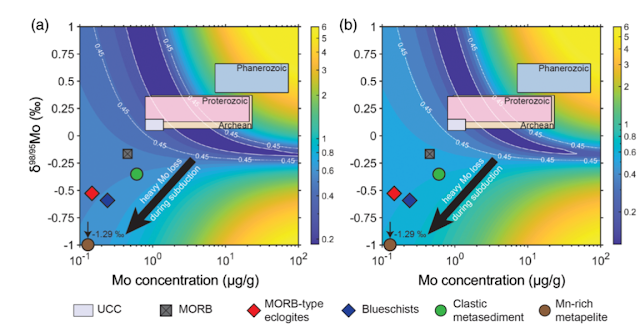 Now and that's the coolest part of the paper: the recycled sediment does not appear to be fractionated compared to the un-subducted protoliths. The data can easily be satisfied with sediments observed at the surface of the Earth (i.e. that never were obliterated by subduction). It's as if the recycled sediments underwent no Mo isotope fractionation.
That's critical: only oxic conditions in slabs can lead to Mo isotope fractionations, according to the well-referenced work of Qasid. This means that whatever is subducted must have been a rather reducing rock, so molybdenum isotopes undergo no measurable fractionation. What this means for Earth's surface evolution? well, subduction must have evolved in time. Ahmad et al., suggest the evolution was abrupt, at the Proterozoic-Phanerozoic transition, reflecting the abrupt evolution in ocean chemistry. The prediction is that Mo isotope fractionation would occur during subduction only in the Phanerozoic and onward... 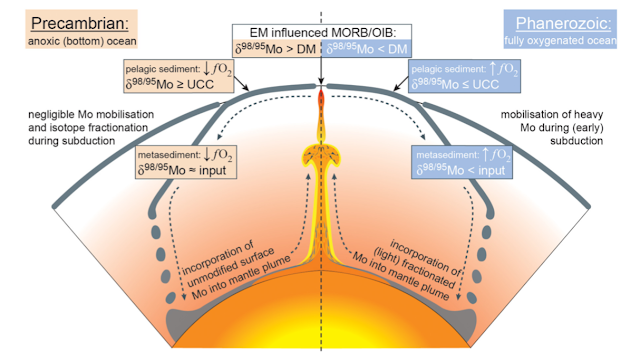 Neat!
So, we ask, can we really use modern subduction to infer redox-sensitive element fluxes in subduction zones, back in time?
Molybdenum isotopes in plume-influenced MORBs reveal recycling of ancient anoxic sediments (2022), by Ahmad et al.,
doi: https://doi.org/10.7185/geochemlet.2236 April 16, 2020
The isotopologue 15N15N of di-nitrogen could be measured in natural samples only at UCLA, in Edward Young's laboratory, with the Panorama mass spectrometer (see picture below). Only a large-radius mass spectrometer such as the Panorama, unique in the world, may allow resolving 15N15N from other compounds. This work's success is entirely due to the beauty of this instrument! Will upload a picture of the Panorama at UCLA!
Read more